Recently, a fabric donation arrived at HQ which included a pair of curtains. Conscious of the waste that is often created after a sewing project, we set out to see if we could take one curtain and use up every last bit of the fabric, sending nothing to landfill.
A zero waste sewing project!

This week semed a great time to share it with you, being Zero Waste Week. 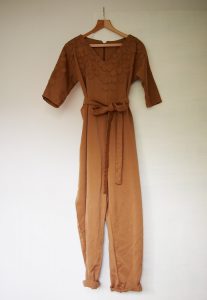 The first thing we made was a jumpsuit. There was just enough fabric to cut the pieces out of the single curtain.

To be honest the resulting garment is rather warm to wear. The curtain material is synthetic mix and quite thick. But it will definitely be extremely cosy in winter!

These were the scraps we had leftover.

Quite a lot of fabric, but not in very useful sizes or shapes…

Ordinarily this would be the stuff that might be thrown away.

Thanks to a less-sucessful-than-imagined printing experiment, some of the scraps were used to cover up paint spots on the top half…

Because some of the scraps were really long and thin, we had the idea of making a draft excluder. And it had to be a sausage dog of course!

Any leftover scraps from creating the draft excluder were cut into strips and used to stuff it, including the curtain tape which was too damaged and dirty to reuse.

Once we’d finished, all we had left was this.

Not bad compared to the first scraps photo.

Have you ever planned a sewing project around minimising waste? If so, we’d love to hear about it!