CAMPAIGNS // Why we want a Fashion Revolution!

Today is the fourth anniversary of the Rana Plaza clothing factory collapse, in which 1,138 Bangladeshi garment workers lost their lives while at work making clothes for the UK high street.

All this week, the Fashion Revolution campaign will be calling on consumers, brands and policy makers to push for a fairer fashion industry, so that tragedies like Rana Plaza can never happen again.

We’ll be supporting Fashion Revolution Week by asking brands #WhoMadeMyClothes and sharing ways we can all help to create a positive future for fashion.

As the week begins, here at Stitched Up HQ we’ve been reflecting on why we want a Fashion Revolution – what changes do we want to to see in the fashion industry and what do we think a fairer fashion future would look like? Read our team’s thoughts below. 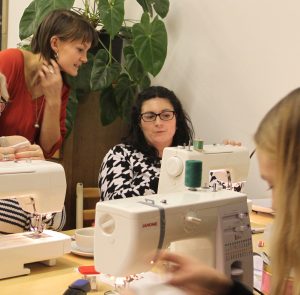 To me it’s simple. Nobody should die for something so frivolous as fashion. Nobody should suffer so that we can buy cheap clothes, wear them twice and chuck them out. It’s easy not to think about the conditions faced by garment workers on the other side of the world, but we have to start seeing them as people, not machines. People with the same hopes and needs as ours.

The future of fashion has to be fair wages for all. The cotton farmers, weavers and sewing machinists who work hard to make our clothes should be paid a living wage for their labour. And this money should come first and foremost from from the gargantuan profits of the big brands. That people like Philip Green get richer and richer while workers on the bottom rung can’t afford basic necessities frankly makes me sick!

I feel like we all need to shake off this hypnotic urge to keep buying so many clothes! The industry does a really good job of making us all feel insecure enough that we compulsively buy clothes in order to continually reinvent ourselves. As the clothes are so cheap, we’ve stopped caring about them. Hardly anyone still has repairing skills like darning which were a staple of everyday family life not so long ago.

The future fashion industry has to be one which produces only high quality clothing, made under fair conditions. Clothes prices need to reflect the actual value, from the material used and the time and effort spent making them. We would be less inclined to throw them out as soon as the next fad appears. We might then get to see people creatively embracing the beautiful art form of visible (and invisible) mending; putting their own stamp on the outfits they wear.

The culture of throwing away clothes after one use is terrifying, but often comes from a lack of awareness about how garments are made and the effects of throwing them in the bin. The more we can educate young people on the lifecycle of garments, about the people who make their clothes and fast fashions negative impacts on the environment the brighter the future of fashion looks.

For me a fashion revolution means changing mindsets a little at a time. It’s a marathon not a sprint, starting with educating the next generation to make positive fashion choices. In the future, I’d like to see sustainability incorporated into every conversation about fashion at school and university. And hopefully, one day, we won’t need to use the term ‘sustainability’ at all, because all fashion will be made in a manner which causes no harm to people or planet.

Want to join in? Find out what you can do to support the Fashion Revolution camapign here.

WORKSHOPS // Announcing the first ever Stitched Up Summer Club!

COVID UPDATE: Due to the national lockdown from 5th January, all our upcoming workshops are postponed. Anyone with a booking will be contacted via email so please check for updates. While our popup shop is not open for browsing, our online fabric shop with click + collect option will be launching on Friday 8th Jan. We are still here and working away, so if you have any queries please get in touch.
CONTACT US >>
This website uses cookies to improve your experience. We'll assume you're ok with this, but you can find out more here: ACCEPT PRIVACY POLICY
Privacy & Cookies Policy