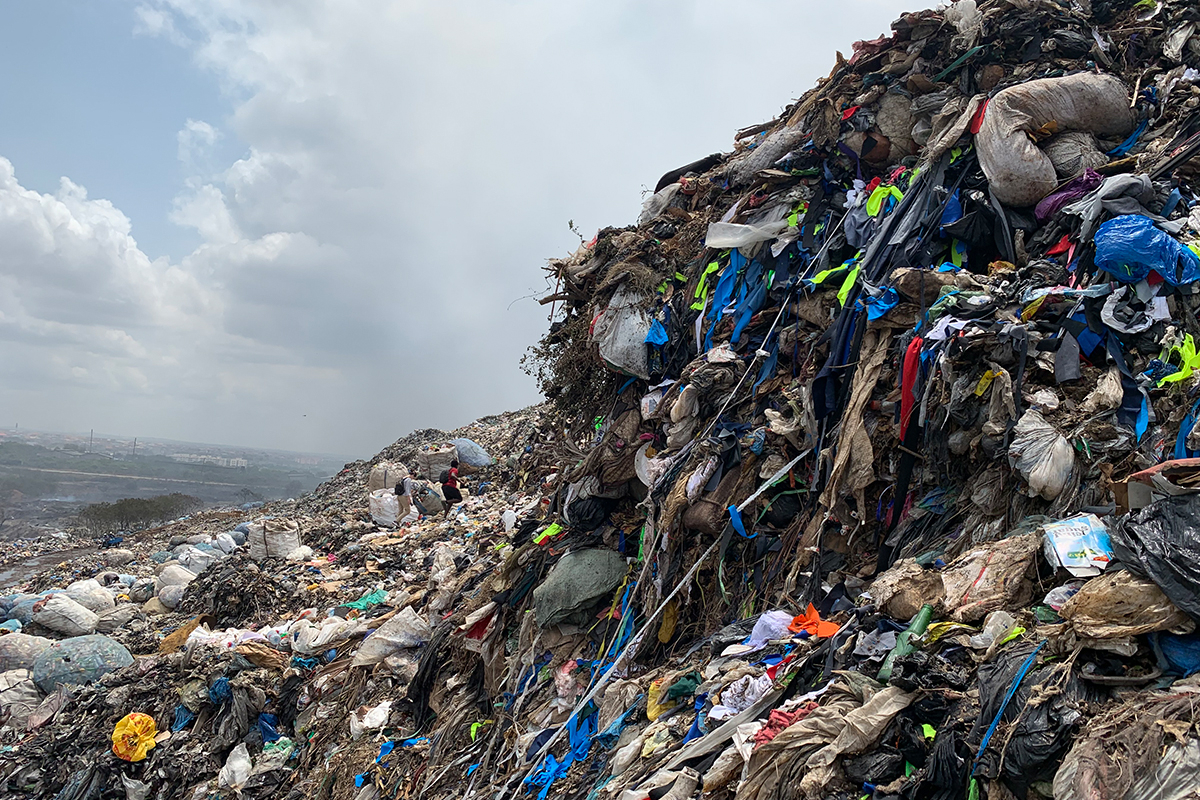 INSPIRATION // Why are Clothes a Climate Issue?

Making new clothes is extremely costly to the environment.  The fashion industry consumes more energy than aviation and shipping combined.
(United Nations Climate Change) and it is estimated that making just 1kg of fabric generates (on average) 23kg GHG emissions.

So where do all these emissions come from? Well, 70% of fashion’s greenhouse gas (GHG) emissions occur in the manufacturing stage of a garment’s life cycle. Over a third (38%) of which is from the production of raw materials. The industry relies on the continued extraction of fossil fuels to produce synthetic fabrics like polyester, to power manufacturing facilities and to create fertilisers and pesticides for crops like cotton.

A polyester shirt has more than double the carbon footprint of a cotton shirt, but polyester is cheap and the use of synthetic fibres is increasing. A recent survey by RSA found that over half of items from online fast fashion brands were made entirely from virgin plastic.

If nothing changes, in less than 10 years, almost 75% of our textiles will be produced from fossil fuels.

If no further action is taken, McKinsey& Company reckon that the fashion industry’s emissions are on course to rise by around a third by 2030.

Between 2000-2014, clothing production doubled and the number of garments purchased by each person increased by 60%. This is mainly due to the ‘fast fashion’ business model, with a much quicker turnaround of new styles, increased number of collections offered per year, and – often – lower prices.

Fashion collections used to be seasonal, released a few times per year. Now 50–100 ‘micro-seasons’ have become the new normal. Zara offers 24 new clothing collections each year; H&M offers 12 to 16 and refreshes them weekly.

Meanwhile a new generation of ultra fast fashion brands such as Boohoo, Missguided and Pretty Little Thing can bring clothes to market within just a few weeks.

Low prices encourage us to buy more. In the UK between 1995-2014 the price of clothing decreased by 50%. On Black Friday last year, Pretty Little Thing drew attention for its 99% off sale, offering dresses for as little as 8p.

With these lower prices also comes lower quality, with clothes that are almost considered disposable – becoming misshapen, shrinking or bobbling after just a few washes.

Despite the high costs of manufacture, we waste huge quantities of clothing and textiles at all stages of the supply chain.

During the manufacture of clothing, approximately 15% of fabric ends up as waste on the factory floor.

A few years ago, it came to light that a number of fashion brands were burning or shredding unsold clothing, (Vox) (Racked) and items returned by shoppers. (CBC)

We keep clothing items for about half as long as we did 15 years ago, wearing items an average of 10 times before being discarded, according to one survey. (Barnardos survey, 2015)

Disposing of this waste has an estimated cost to UK economy of approximately £82 million each year.

Of the clothing and textiles which are collected for reuse or recycling, 31% is sold in UK charity shops but 60% is exported overseas, where it is sold on for reuse.

This short video shows what happens to used clothing in India sent for recycling, but used clothes from the UK get sent all around the world. The main recipient in 2020 was Ghana, followed by Poland, Nigeria and Ukraine.

While it might seem good that our old clothing is being reused, unfortunately the export of secondhand clothes is actually very problematic, with some describing the phenomena as ‘waste colonialism’. The large quantities and low quality of clothing coming mainly from the UK and USA are overwhelming waste management services and disrupting local clothing manufacture, leading countries in East Africa to consider a ban on imports of secondhand clothing from overseas.

This report from ITV gives an overview of the problems caused by waste clothing exported from the UK to Ghana.

SO WHAT CAN YOU DO?

It’s easy to feel overwhelmed by the huge, global environmental impacts of the fashion industry. But making a difference might be easier than you think! There are plenty of things you can do to significantly reduce the carbon impacts of clothing. And the best news is that most of them require nothing more than a bit of your time.

According to research by WRAP, by keeping your clothes in use for an extra nine months – instead of buying new ones – you reduce their carbon, water and waste footprints by 20-30%. There are loads of ways to give your clothes a longer life, from swapping or handing down your unwanted garms, to learning the skills to repair or repurpose clothes yourself. Even making a conscious effort to look through your wardrobe before going shopping will make a big difference, as you’ll be less likely to forget what you already have before buying more. A shocking 30% of the clothes in our wardrobe have not been worn in the last year!

The ‘use-phase’ in a clothing lifecycle accounts for 20% of emissions. A big part of this is washing and drying your clothes, which uses a lot of energy. By washing your clothes less often and at lower temperatures, and line drying, you’re reducing this impact.

And last but definitely not least, use your voice – contact your favourite clothing brands and ask them what they are doing to reduce their carbon emissions.

Follow Fixing Fashion for progress on pushing the government for legislation on these and other issues relating to the fashion industry.