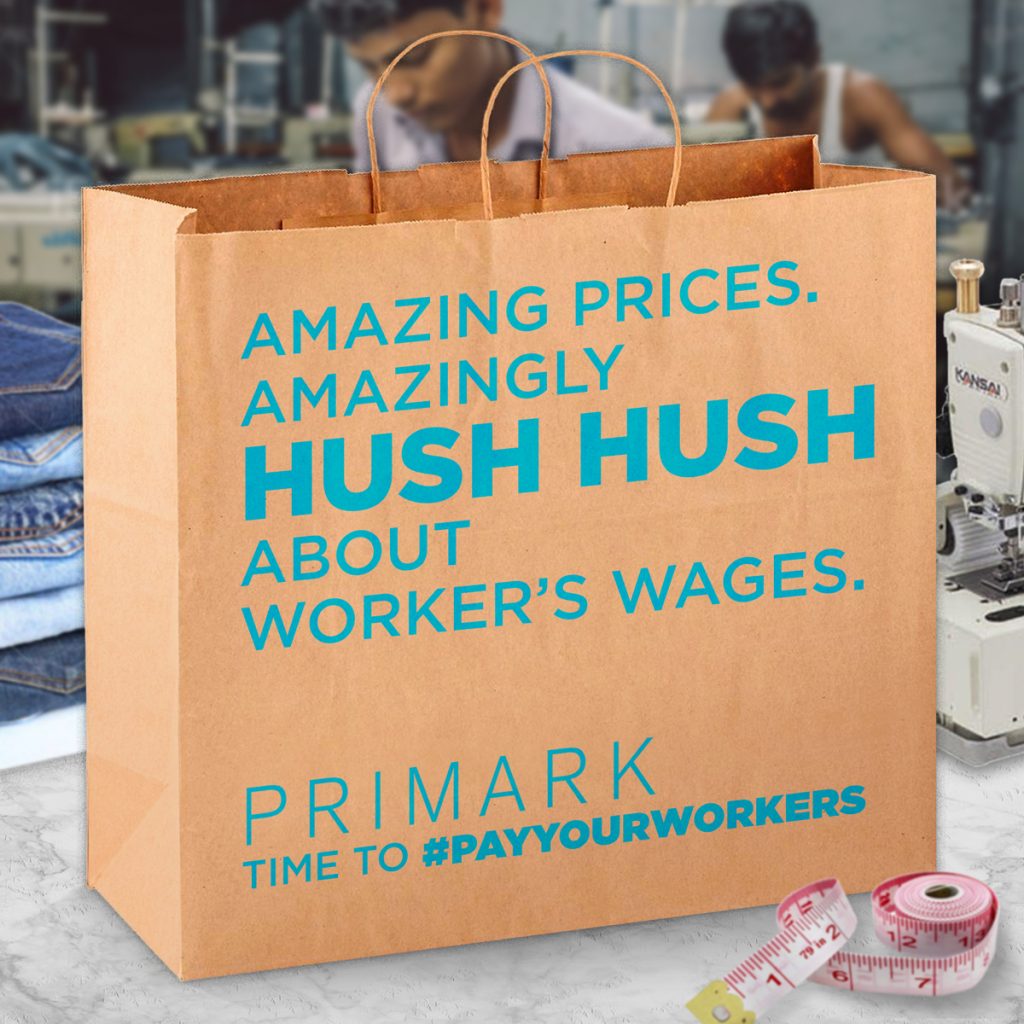 CAMPAIGNS // Primark, Have You Paid Your Workers?

Labour Behind the Label are calling on Primark to clarfiy that the garment workers making their clothes have been paid throughout the pandemic.

From 11th – 20th November, join calls for Primark to #PayYourWorkers.

When lockown hit in spring this year, fashion brands cancelled clothing orders en-masse, and many of them refused to pay for clothing already made, leaving garment workers without pay and in even more precarious situation than they were already.

In April, after intense pressure from a coalition of workers’ rights campaigners including Labour Behind the Label, Primark announced a fund to pay the wages of workers linked to orders that were due for shipment in the month after they were cancelled in 7 countries: Bangladesh, Cambodia, India, Myanmar, Pakistan, Sri Lanka and Vietnam.

However, it took until September before the terms of this fund were deemed by campaigners to move Primark to the positive side of the Worker RIghts Consortium tracker.

Labour Behind the Label are now calling on Primark to be transparent about how they have ensured that the money reached workers, what measures were taken in other countries in which Primark produces, how the brand calculated how much it had to pay and whether all workers have been paid in full. The brand had also stipulated that the wage compensation would be adjusted to account for government support packages, a caveat that has caused confusion among suppliers and industry bodies. Despite the lack of transparency, Primark claims that the program has been implemented successfully.

On their website, Labour Behind the Label give three examples of Primark garment workers’ un(der)paid wages:

“In Bangladesh, one of Primark’s suppliers (KAC Fashionwear Limited) which usually employs more than 6000 people, now only has 500 of them working now, while the rest of the workers are on ‘holiday’. Workers have stated that only workers who are currently working are being paid, while others are going without wages. The factory management has reported to have said that they are unable to pay salaries now due to lack of funds.

In Myanmar, a Primark supplier (Shinsung Tongsang International Co., Ltd) closed its factory in May, resulting in 2000 out of 2108 workers losing their jobs and receiving only partial payment.

In Cambodia, workers from another factory (New Best Global Textile Co Ltd) allegedly supplying Primark, staged a protest over wages and compensation owed after their employer fled. The workers are seeking eight days of owed wages, suspension benefits, severance pay and other compensation after the company closed.

This is just a snapshot of workers experiences from three of Primark’s factories, the true scale of the impact on garment workers is much bigger. The Clean Clothes Campaign estimates that garment workers are owed between 2.42 and 4.38 billion GBP in unpaid wages from the first three months of the pandemic alone.“

What is being asked of Primark?

Labour Behind the Label are calling on Primark to publish on their website, their commitment to ensure that all workers in their supply chain are paid their legally mandated or regular wages and benefits, whichever is higher. This includes wage arrears (back pay) and, where applicable, negotiated severance pay. 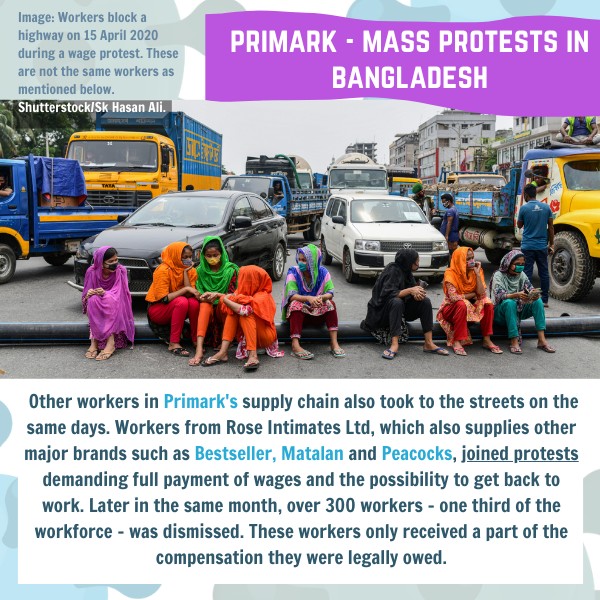 What can you do?

There are three ways you can join the calls for Primark to do the right thing.

Use your voice and call on Primark to ensure that their workers are paid throughout the pandemic and beyond.

Sign the petition today and ask Primark, do you #PayYourWorkers 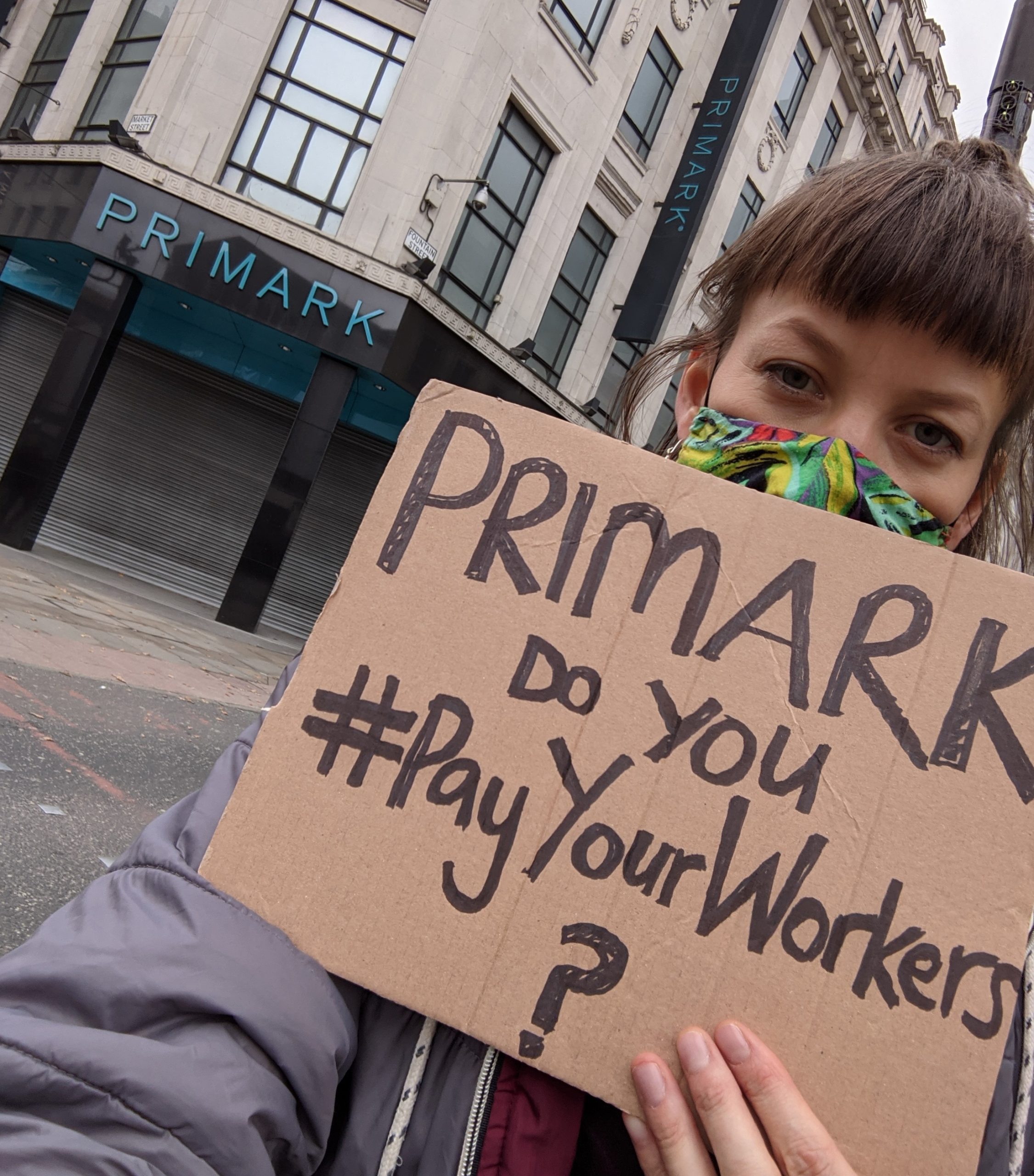 The UK lockdown means that we can’t meet and protest together. Instead, we are asking activists to make protest banners and take a photo with them outside their local Primark store (or if it’s difficult to do that, take a photo at home).

Share your photos on social media between the 11th -20th November, tagging @Primark and use the hashtag #PayYourWorkers. 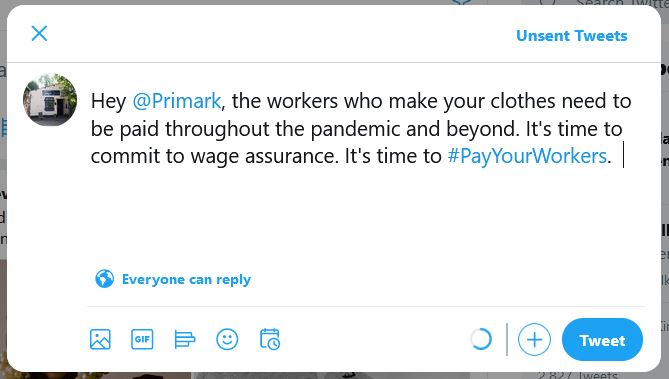 Take to social media and let @Primark know that you want them to commit to paying the workers in their supply chain. Click HERE to use a ready made tweet. 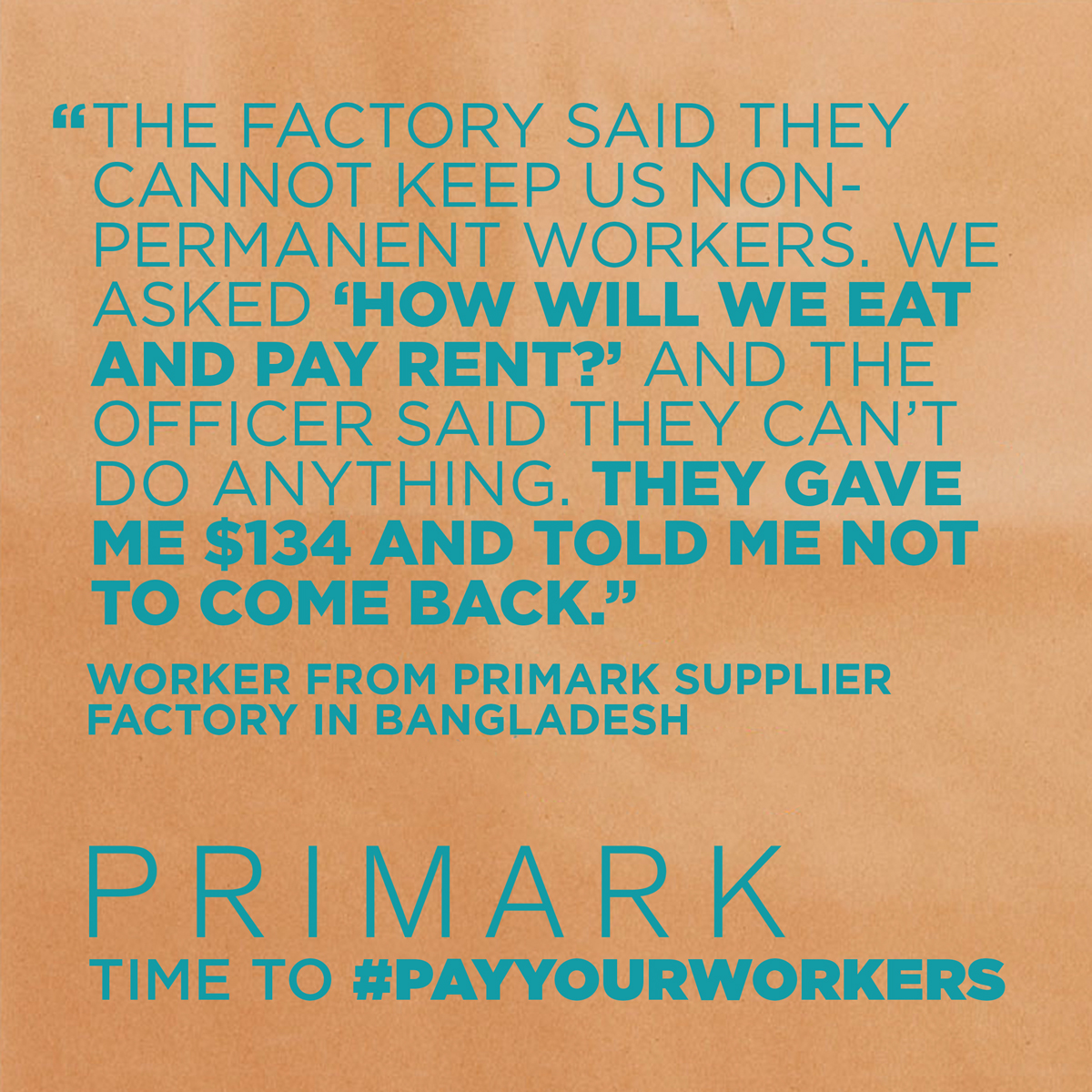