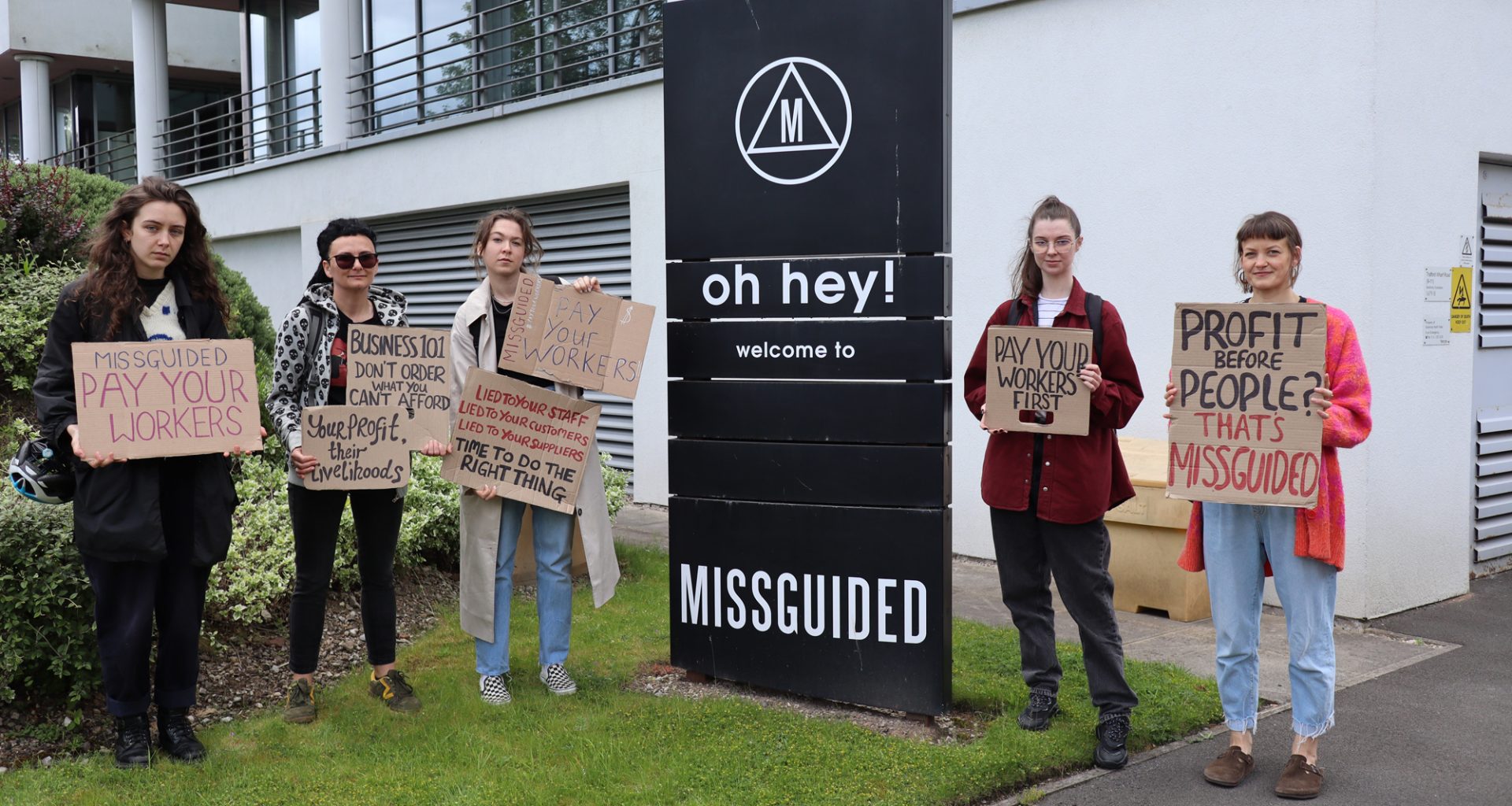 Today, alongside @xrfashionaction, we took part in a demonstration outside Missguided HQ in Manchester, calling on them to pay the money owed to their suppliers – some of whom haven’t been paid by the company since January.

On 30th May Missguided went into administration. Just a few days later, Mike Ashley purchased the intellectual property of the brand, but the company itself continues to be run by Alteri Investors, its owner since late 2021 – around the same time that payments to suppliers reportedly started to falter.

Labour Behind the Label are calling for Missguided, the companies who still own a financial stake, and the administrators dealing with the insolvency of the company, to pay workers and suppliers first.

An article in the Guardian quoted a Leicester supplier who had not been paid since April and was owed more than £2million. He said he had been forced to send his 90-plus workers home as he could not pay them.

Kaenat, Labour Behind the Label’s community engagement lead in Leicester spoke to a Missguided worker. She said: I am a Leicester garment worker affected by all this. I was unable to pay my rent, my bills, my basic necessities. More importantly I’m unable to feed my family and soon I’ll run out of whatever I have saved. It’s a disgrace what Missguided have done to us. We need our pay.

This devastating article in the Guardian shares the experience of hundreds of garment workers in Pakistan who have been left destitute and starving after being laid off by a factory which has been making clothes for Missguided since 2017.

Not only has the company failed to pay for its orders for many months, it has also continued to take orders from customers knowing it wouldn’t be able to fulfil them. Many have paid for orders that have never arrived.

According to an article in the Manchester Evening News, employees of the company this week reported being sacked via an automated voice message in a conference call which was called with only 25 minutes notice, and did not include people on holiday or maternity leave. Some are said to be looking into taking legal action.

This whole Missguided mess reveals the true greed and irresponsibility of the fast fashion business model. While investors are paid off, everyone else in the supply chain is disregarded and left to foot the bill.

We demonstrated today in Manchester outside Missguided HQ in solidarity with an action taking place in London at the same time.

In London, Missguided suppliers and activists including @labourbehindthelabel, @ohsoethical and @venetialamanna took a letter outlining suppliers’ demands to the offices of the company’s financial backers, Alteri Investments and administrators Teneo.

In Manchester at Missguided HQ, we were told that the office was closed and there was only one member of security staff in the building. We were then told the police would be called – seemingly common practice at Missguided who recently called the police on their suppliers when they turned up to ask where their outstanding payments were.